The developer's portfolio acts as a showcase of his skills and projects. And I think the one you're currently on is a great example.

As a developer, having a portfolio online is a great to way to showcase my skills and experience, as well as learning new things along the way. 9 months after starting to learn web development, I wanted to build mine. I had done quite a lot of experiments but lacked real projects so it was a good exercise too. In the following, I’ll go through the iterations of my website, explain choices I made and issues I faced. Enjoy reading! 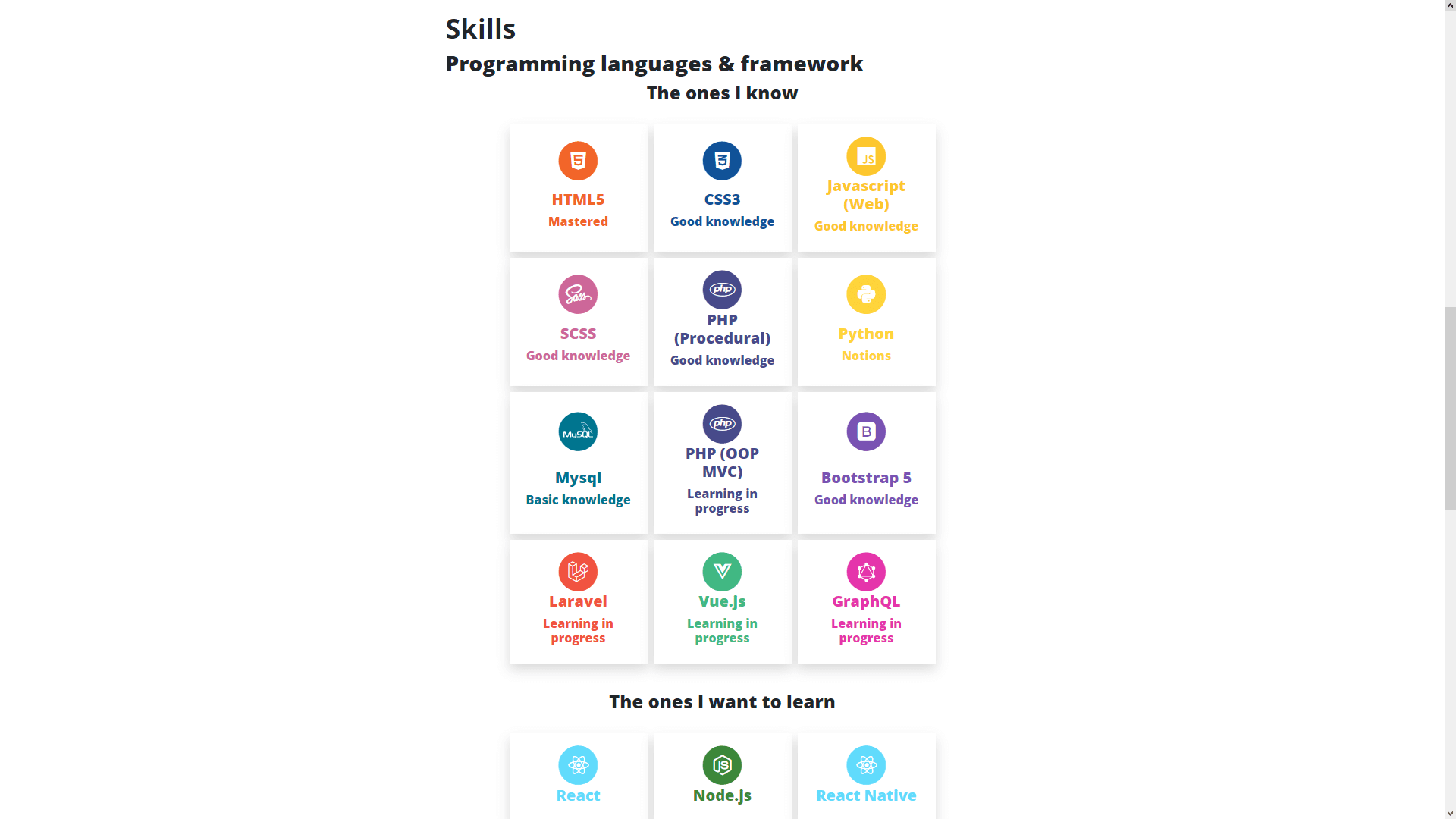 Back in August 2020, I had to choose technologies to build my portfolio. At the time, I knew HTML5, CSS & SCSS, PHP and Bootstrap.

Because I spent a lot of time on Bootstrap docs in the previous months, I knew that static site generators existed (since Bootstrap docs use Hugo). So I searched for the best fit for me and eventually found Jekyll.

It uses the Liquid syntax and relies on Ruby. I knew nothing about both of them so and it made it harder to build my portfolio.

I used a template I found on the Internet, tweaked it a bit but I won’t lie: it was bad.

And setting the deployment was hard since GitHub Actions were not released yet so I had to use Travis CI and GitHub Pages to release my portfolio.

So as I was learning more about frontend development and in particular JavaScript frameworks, I decided a few months later to rebuild my portfolio from scratch. 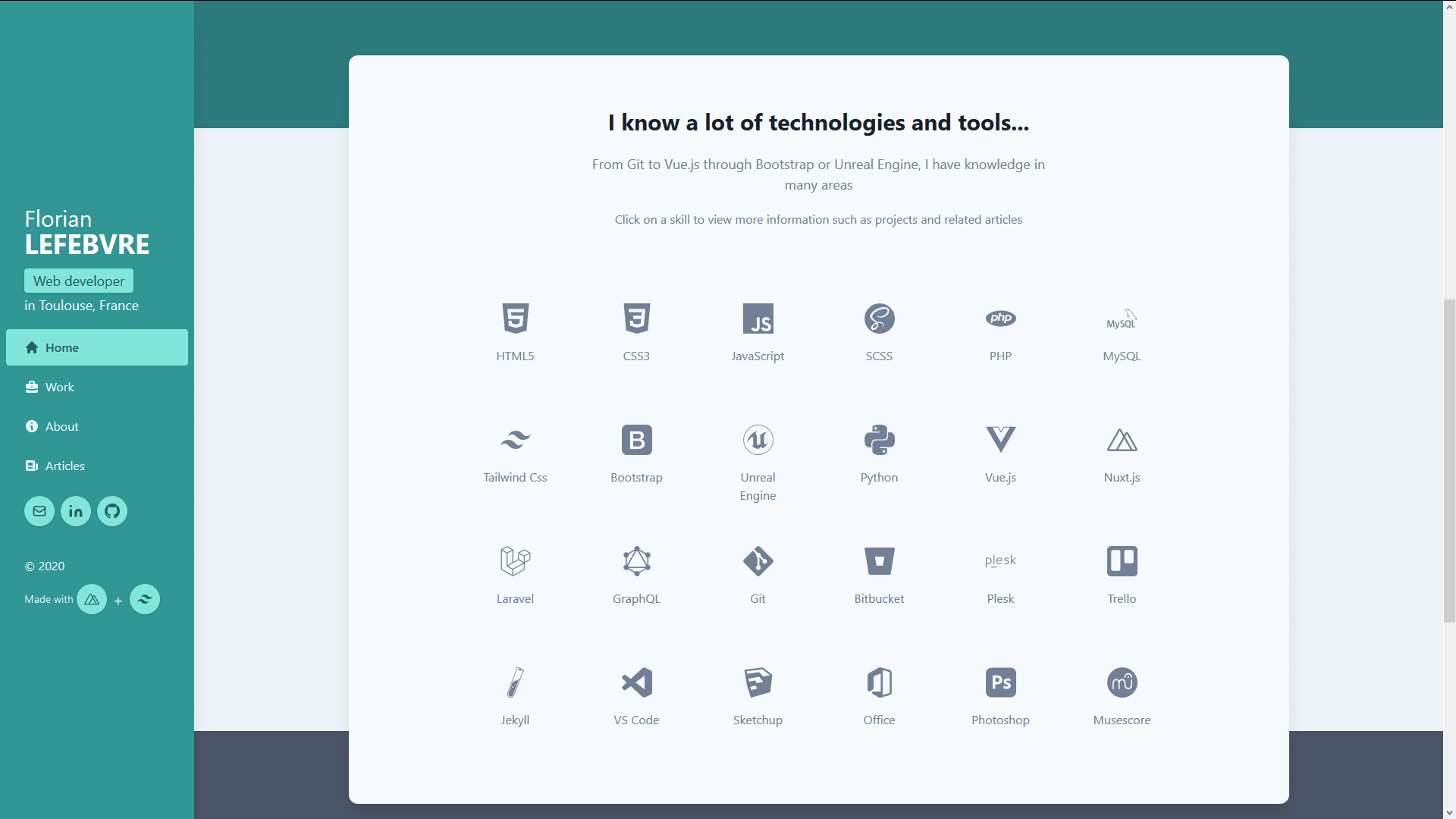 I learned a lot of things since August 2020, so I decided to go with Nuxt and Tailwind CSS.

I chose to use a sidebar for navigation and now I think that wasn’t a good choice. The space I was loosing for only a few infos was too much. But anyway, I chose the color teal as a primary color. I also used the official Nuxt modules such as @nuxt/content but I struggled with the layout on some specific screen widths with weird horizontal overflow, caused by code blocks.

This time, I used Travis CI and a Plesk server to deploy my portfolio.

For further explanations about v1 and v2, check out this archive.

But as always, I wasn’t satisfied of my work and thought it wasn’t good enough as a showcase of my skills. So I remade it of course!

I’m not crazy, I don’t use a new technology every day so I kept using Nuxt and Tailwind CSS. I decided to so something more simple: only one ppage with all informations. I chose some kind of minimalistic design with only gray shades and no primary color. I also implemented a dark mode. I discovered animations using AnimXYZ but I’ve got to say that it wasn’t that easy to do animations with it.

Well, I think no screenshot is required…

I upgraded Nuxt to its 3rd version (in beta) as well as Tailwind CSS (no majors changes IMO). And I’ve got to say that Nuxt 3 and Vue 3 are absolutely amazing compared to their previous major versions. Typescript is the best. But using Nuxt 3 in beta has downsides, for stability (laggy HMR), weird broken imports or missing features. I’m mostly enjoying using it.

Concerning animations, I switch to @vueuse/motion and it’s really better.

In fact, because ecosystem isn’t compatible yet, I had to dive a bit deeper in Nuxt and learned how to build modules (for generating a sitemap for instance) and that was really enriching.

If you’re curious about it, I created a custom sitemap module, check it out.

Since only SSR is available (as of the beginning of March 2022), I deploy my portfolio on Vercel, the process is way simpler than on GitHub Actions or any other CI since Nuxt has first class inegrations for deployments.

I hope you’ve find this article interesting, feel free to open an issue for any suggestion or if you want more in depth informations on some specific topics.

BTW here is the link to the repository: https://github.com/florian-lefebvre/portfolio.

Portfolio
The developer's portfolio acts as a showcase of his skills and projects. And I think the one you're currently on is a great example.
Type
Website
Technologies
Nuxt 3, SSR, Tailwind CSS, TypeScript, Vercel, Vue 3, VueUse
Links
GitHubWebsite

If you wish to talk, or chat about an existing / upcoming project, feel free to reach out with any of the below methods.